I thought I’d send you and everyone at NTCR an update on how Newton is doing in his “furever” home – in a word, spectacular! He took a few days to come out from hiding and to stop running away from us. In just one week, though, he’s became very affectionate and playful and has taken over the house. He really has us both wrapped firmly around his furry little paws. We’re amazed at how quickly he has settled in around here – we thought, when we met him, that his laid-back nature would be helpful in the transition and happily we were right.

We’ve rearranged furniture so he has access to perches at several windows, where he enjoys watching the birds and squirrels. He wasn’t too keen early on about the neighbour’s cats – they startled him coming over the fence between the yards the first couple of days – but he’s getting used to their sudden appearances. We picked up some toys for him, his favourites involve feathers. He’s been pretty good about using the scratching pad but we do have a little work there, as he does sometimes take a run at the furniture. I also really need to cut his claws, but he’s not quite settled enough to allow that. We’re working with him, and I think I’ll be able to do that very soon. I hope!!

He’s eating well and is a perfect litter box user. He’s also starting to become more vocal. We’re still learning his language and getting used to a new energy level around here (it’s been nothing elderly cats for the past 7 or so years). But he’s so very sweet and lovely and we couldn’t be happier that he seems to have adopted us too.

Thank you for helping us find this beautiful boy. We’re so pleased to give him a home! I’ll keep in touch with his progress, and wish everyone at NTCR all the best. 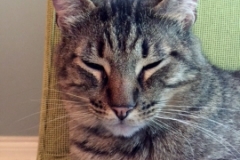 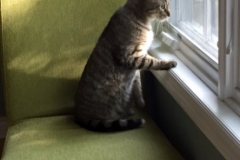 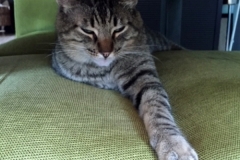 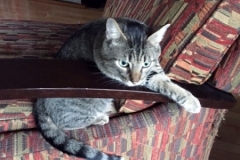 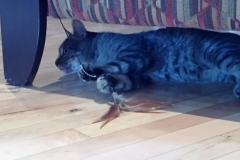 << BACK to Love Letters

“Pawlease” Help Us Move to Our Fur-ever Home!

“Pawlease” Help Us Move to Our Fur-ever Home!